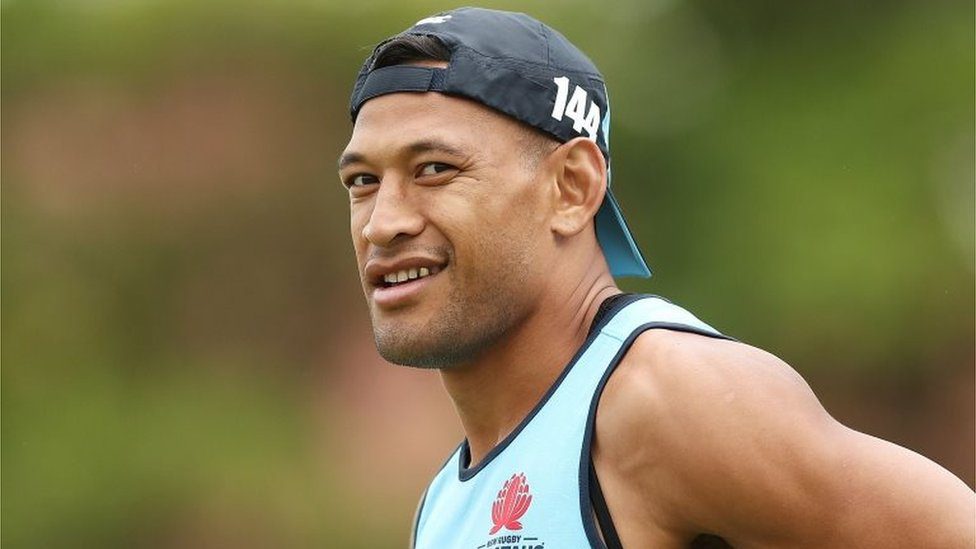 A controversial fundraising page set up by sacked Australian rugby player Israel Folau has been shut down for promoting the exclusion of LGBT people, website GoFundMe says.

Folau had his contract with Rugby Australia (RA) terminated in May after he said that "hell awaits" gay people.

He asked for public donations to help him with a legal fight against RA, arguing it dismissed him unlawfully.

GoFundMe said the page violated its rules. All donations will be refunded.

"As a company, we are absolutely committed to the fight for equality for LGBTIQ+ people and fostering an environment of inclusivity," said spokeswoman Nicola Britton.

"While we welcome GoFundMe's engaging in diverse civil debate, we do not tolerate the promotion of discrimination or exclusion."

Folau is a Christian who argues his contract termination was an act of religious discrimination.

RA terminated Folau's contract after saying he had breached behaviour standards "including respectful use of social media" by making anti-gay posts.

"Every Australian should be able to practise their religion without fear of discrimination in the workplace," he said in a video last week.

The former Wallabies player has drawn widespread condemnation for his social media comments, but he also has vocal supporters.

RA had previously warned Folau over anti-gay messages he had posted on social media in the past.

In May, chief executive Raelene Castle said RA had terminated his contract to "stand by our values and the qualities of inclusion, passion, integrity, discipline, respect and teamwork".

Folau has played 73 Tests for Australia and was on a contract estimated to be worth A$5m. He owns a multi-million dollar property portfolio in Sydney and Brisbane, Australia's Daily Telegraph newspaper reported.

Folau said he and his wife had already spent more than A$100,000 on legal fees, after engaging a top legal team.