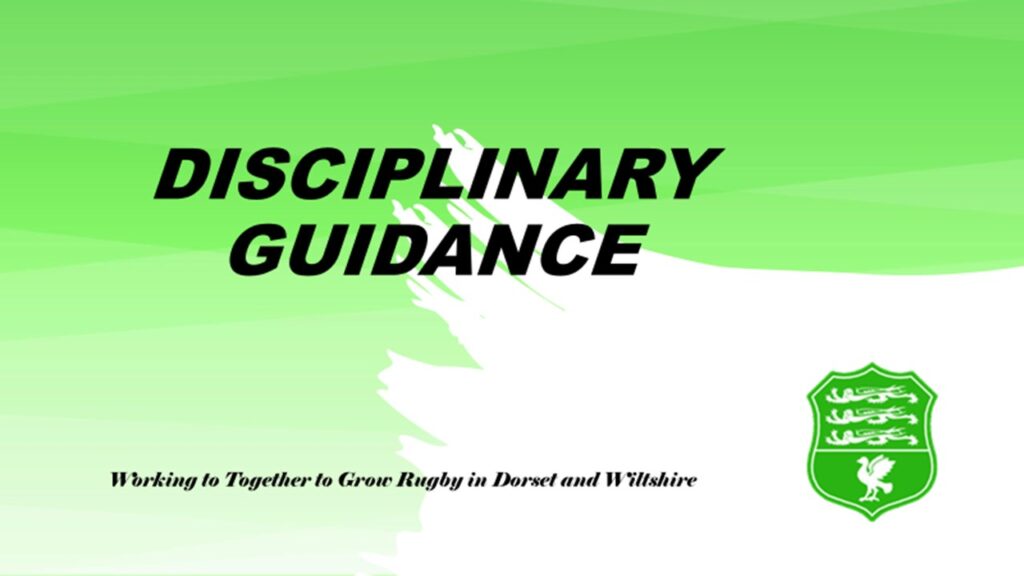 Please note that the fee for failing to report a Red Card or a Match Official Abuse, has increased from the 12th of January 2022 to £125.00 from £100.00. This is due to the extra workload involved due to clubs failing to report an incident within 48 hours as per RFU Regulation 19.

If a club complies with the RFU Regulations within the 48-hour period, the fee will be reduced to £85.00.

CLUB PROCEDURE FOLLOWING THE SENDING-OFF OF A PLAYER

Every club is required to have a properly constituted Disciplinary Committee that is charged with maintaining the standards of discipline within the club. It is strongly recommended that this committee be pro-active rather than reactive.

As stated in RFU Regulation 19, in all circumstances Club Secretaries must report to the Chairman or Secretary of the Dorset & Wilts Disciplinary Panel within 48 hours after the match the name, address and contact telephone number of any player who has been ordered off the playing enclosure, including players under the age of 17. Referees are also required to submit a report in the prescribed form. (There are no exceptions to this and it applies equally to Society, to non-society referees and to those who ‘just take up the whistle’.)

In accordance with RFU Regulation 19, the Dorset & Wilts Disciplinary Panel will charge a fee of £85.00 towards the disciplinary hearing expenses. This fee rises to £125.00 if the process is not complied with.

These contributions cover the administration costs (including Panel travel), the hiring of rooms and equipment. In addition if a club is subject to a disciplinary hearing then that club must pay the costs incurred.

Age Grade regulation applies to School, Age Grade rugby and Representative Rugby up to and including U18's teams. Where a player aged under 18 is playing in an Under 20’s or an adult team (s)he is subject to the RFU regulations, which apply to all adult players as covered in the RFU Discipline Regulations).

If a player is sent off or cited in a school match then that player’s head teacher has the responsibility for taking disciplinary action against him or her, under the guidance of the CB Age Grade Disciplinary Secretary (CBAGDS).

The panel should ideally consist of three people.

The player must be heard and can be represented.

The hearing should be conducted in accordance with the RFU Disciplinary Regulations set out above, adapted as necessary to the circumstances.

The referee’s report will be read or details of the conduct alleged will be explained. The person appearing before the panel should be asked whether the allegations are admitted. If they are, the Panel will then hear representations in mitigation before deciding on the sanction or sentence.

If the allegations are not admitted, the Panel will hear the evidence in the following sequence:

Witnesses supporting the allegation will be heard and cross-examined.

The person against whom the allegations are made shall be entitled to give and to call evidence in rebuttal subject, again, to cross-examination.

The chairman will then invite all persons other than the members of the Disciplinary Panel to retire whilst the panel considers its decision in private.

The panel will decide whether, on the balance of probabilities, they find the case proven or not. They should provide the player with reasons for their findings.

The standard of proof in disciplinary cases is the balance of probabilities and not, as in a criminal court, beyond reasonable doubt.

The panel usually has no power to impose a fine; but it will charge the administrative fee for the hearing and it may also award reasonable travel costs incurred by witnesses against the player or player’s school or club.

The principles of natural justice, as they apply to RFU disciplinary matters, should be applied. The player must be advised of his right to appeal any decision and that (s) he must do this within 14 days of the hearing.